Dainik Samvaad News and views for the common man
HomeEntertainment‘Had to wait a long time for advertisers to consider me’: Ranveer...
Entertainment 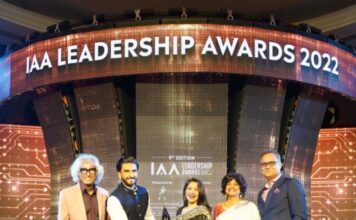 An undisputed superstar now who endorses 40+ brands, Ranveer Singh had actually signed his first brand in 2013! Within a course of 9 years, the actor is valued as the biggest film star in India today, according to the Celebrity Brand Valuation Report by Duff & Phelps! According to the report, Ranveer is the biggest film celebrity in India today as his brand valuation currently stands at 158 Million USD, an impressive growth from his number of 102.93 Million USD in 2020.

Ranveer Singh, who has been honoured as Brand Endorser of the year at the prestigious IAA Leadership Awards last night, says he had to wait for a long time for brand to consider him as their face. “I wrote my first ad. My first movie was a hit, my second and third, not so much. I had to wait a long time for advertisers to consider me. So, after my first hit, all these brands came — cola, telecom, and at the time I was advised, ‘Yaar abhi mat kar, teri agli picture hit hogi toh you do them on a higher price’ (Don’t do them now. When your next movie becomes a hit, then do them).”

Ranveer was an overnight sensation as his film Band Baaja Baarat catapulted him to instant stardom. However, the second and third films of Ranveer, Ladies vs Ricky Bahl and Lootera, failed to set the cash registers ringing. As a consequence, Ranveer lost all the offers for brand endorsements. But the actor waited for four years and finally wrote an ad.

About his journey to be the biggest brand endorser today, Ranveer says, “From starting my professional journey as a copywriter in an advertising agency to now being honoured with the prestigious ‘Brand Endorser Of The Year’ award – life has come full circle! Thank you to the International Advertising Association (IAA) for this recognition, immensely grateful!”

Ranveer Singh joins the likes of Priyanka Chopra, Shah Rukh Khan, Amitabh Bachchan and other top Bollywood personalities who have received the same honour from IAA over the years.

Today, Ranveer has not only established himself as the best actor of the country from his generation but he has also solidified his position as a pan Indian hero, given his remarkable decade in the Indian film industry. His path-breaking acting performances and his envious box office track record makes him a big screen showman like no other. Ranveer will be seen in huge big screen tentpole films like Rohit Shetty’s Cirkus, Karan Johar’s Rocky Aur Rani Ki Prem Kahaani and maverick South director S. Shankar’s retelling of his cult classic Anniyan.