Dainik Samvaad News and views for the common man
HomeIndiaRBI governor Shaktikanta Das announces hike in repo rate to 5.9%
IndiaNews You can use 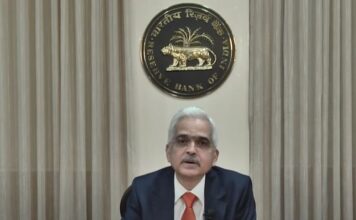 The Reserve Bank of India (RBI) has hiked the repo rate by 50 base points, RBI governor Shaktikanta Das announced on Friday announced. The decision was taken by the central bank’s monetary policy committee. The repo rate is now at the highest it has been since 2019 – 5.9%.

Das told the press, “The global economy is in eye of storm but India has withstood shocks over the last two years. The inflation rate is projected at 6.7 per cent. The MPC has to remain alert and nimble, eyeing the current conditions. While the real GDP growth in the first quarter of this year turned out to be lower than expectations, nonetheless it was 13.5% & perhaps the highest among the major global economies.”

He also mentioned that coronavirus pandemic and Ukraine war have had major impact on global economy.

What is repo rate?

The interest rate that the RBI (or any country’s central bank) charges while lending money to the commercial banks is called repo rate.

How does it effect the common man?