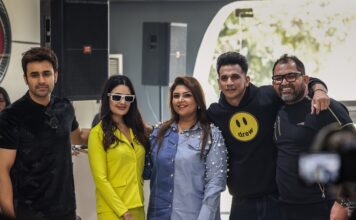 With a flag-off at the Gurgaon showroom the participants headed towards the Aravali Hills at 8:00 a.m. The two-hour drive was followed by a champagne brunch, live music and a relaxing session with fun activities were planned for the superwomen. Post the drive luxurious self-care pampering session was organised by BBT that included a relaxing foot & shoulder massage by Delhi’s luxury salon, Levo. Accompanying with a live makeup studio kiosk for all the phenomenal women. This also includes customised jewellery design for all the brilliant women by Aetee Jewellery. The event also observed an art exhibition by the stellar artist Michelle Poonawalaat the brunch.

Ritika Jain Ahuja, Founder of the Queens Drive Club and COO of BBT, spoke about the event: “While I wanted to create a platform for women like me who love to drive and are interested in supercars. As I believe women can run a family, company and a whole nation then there is nothing that we can’t do. My main goal was to break the stereotype that women aren’t good drivers”

Dr. Neharika Yadhav, Dental Surgeon and Superbike racer added, “When Ritika called me and shared her thoughts on starting the 1st women’s supercar club I was super excited to be a part of it as no one has previously worked on bringing women behind such beautiful power machines together on one platform. Being women who share the same passion of need for speed and all things beautiful inside out this is a great merger. After all, why should only boys have all the toys”

Roshni Misbah, Hijabi biker and owner of a superbike store commented, “You can be an absolute smart and tough woman and still not lose your femininity.”