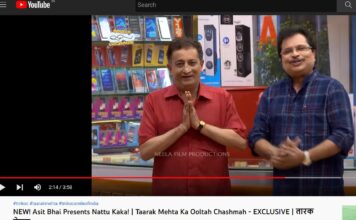 Theatre artist Kiran Bhatt has joined the popular TV show, Taarak Mehta Ka Ooltah Chashmah, and will essay the iconic character of Nattu Kaka. The character was earlier played by Ghanshyam Nayak who died after a long battle with cancer last year.
Kiran Bhatt said he is glad to to do the role as Nayak was his close friend. “It’s almost like the old Nattu Kaka is bringing in the new Nattu Kaka and I am glad to be doing the role of my dear friend Ghanshyam. It is a very emotional role for me and I hope to do justice to the role Ghanshyam excelled in ever since the beginning.”

Producer Asit Kumar Modi added, “Recently as we inaugurated the new showroom of Gada Electronics, it still did not feel complete and something was missing. We had to bring Nattu Kaka back. The love that we have been showered with ever since we began in 2008 is immense and we hope that the audience embraces Nattu Kaka as he is all set to return to Jethalal’s newly inaugurated store.”

Taarak Mehta Ka Ooltah Chashmah has been entertaining the audiences for 14 years now. It first aired in 2008 and has completed 3400 episodes. Other than its flagship show, Neela Film Productions Private Limited also streams Gokuldhamchi Duniyadari in Marathi and Tarak Mama Ayyo Rama in Telugu on YouTube. The show is created and authored by Asit Kumarr Modi.