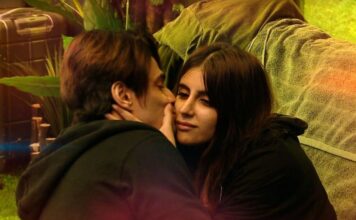 Sahil Shroff’s eviction in the very first weekend of Bigg Boss has given the contestants a reality check, pushing them to up their survival strategies in this jungle. The ‘Junglewasis’ aims to develop some unique jugaad to get back in the main house. Jay, Vishal, Karan, Tejasswi, and Vidhi start brainstorming with their team on tactics to find the piece of the map very early on in the day. They are eager to execute this task while the ‘Gharwasis’ are asleep.

On the other hand, Ieshaan and Pratik lock horns while securing the piece and keeping it safe. Their fight gets intense to the extent others intervening to pull the two apart.

With the dangal in the jungle getting aggressive every passing day, the viewers now have a lot of fun in store for them. The jovial Tejasswi entertains her fellow inmates by taking suggestions on dressing up for her ‘Baby’ aka Bigg Boss if she is called into the confession room. Jay and Karan start pulling her leg. Jay teases, “Kisi ladkon ke liye tumne itna make up nahi kiya” to which Karan adds, “Woh apne ‘Baby’ ko milne ja rahi hai!”

While Tejasswi’s one-sided love for Bigg Boss is levelling up, another love story is brewing in the house. The two love birds, Ieshaan and Miesha, are seen moving fast in their relationship, increasing their public display of affection. They start kissing and getting cosy with each other multiple times in the house.

However, a sudden announcement by Bigg Boss himself makes all the smiles disappear. Bigg Boss declared the nomination task for the week, which will end the journey of one contestant. While ‘Gharwasis’ are safe inside the main house, ‘Junglewasis’ must participate in this nomination task. This task occurs in pairs where Bigg Boss selects a couple who have to nominate one contestant with mutual agreement. If the two housemates in the team fail to nominate one person, they will be nominated instead.

This open nomination will become the starting point to many fights between ‘Junglewasis’ themselves when they see tables turning and new gameplay unfolding. The nomination tasks will stir up things, with friendships going for a toss, fingers getting pointed, and revealing of true faces!

Who will fall prey to this latest tactic and get one step closer to eviction after getting nominated?

To know more, watch BIGG BOSS, presented by TRESemmé, powered by Knorr and Dabur Dantrakshak Monday to Friday at 10.30pm and Saturday and Sunday at 9.30pm only on COLORS!